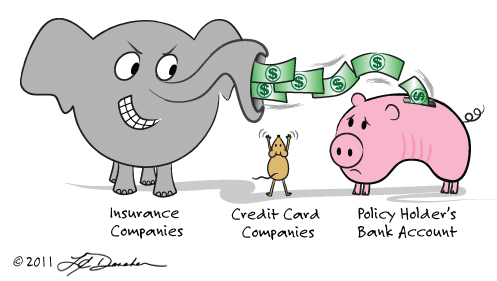 According to data from the U.S. Census Bureau, there were 159 million credit cardholders in the United States in 2000, 173 million in 2006, and this was estimated to increase to 181 million Americans in 2010. About 60 percent of consumers have a rewards credit card*. Love them or hate them, credit cards have certainly helped change the way Americans purchase and it seems that credit card companies are still thriving through the recession.

However, the tide is turning on the ability to use those charge cards on the services and items you prefer. More companies, especially insurance companies, are refusing to accept credit card payments due to the fees that are attached to providing that service. You would be surprised at the companies that are getting down right cheap about it.

Companies That Will Not Accept Credit Cards

Anthem Blue Cross Blue Shield has recently sent out a letter warning policy-holders that they will be refusing automatic, monthly credit card payments, beginning May 1, 2011. WellPoint, Inc., the parent company of Anthem, stated that its fourth-quarter net income rose to $2.7 billion in 2010. The President and CEO, Angela Baly, received a 3 percent raise in total compensation. She now receives a total pay package worth $13.4 million, an increase from $13.1 million in 2009. This company is financially capable of providing credit card payment processes for their customers. They appear to be more interested in earning profits than helping their customers in an economically challenging time.

“Our customers come first. We prosper only to the extent that we create long-term relationships with satisfied customers. We do so in discerning their needs and responding to them; in providing high value, distinctive products; in prudent investment of policyholder funds; in systems, information, and counsel which help our customers solve problems; and in prompt, accurate, innovative, and courteous service which is the best in the business.”

However, when we called to inquire about the change in accepting credit card payments, they refused to bend or discuss it any further.

So forget about receiving those mileage points, gift rewards or the convenience of credit card billing when it comes to paying insurance premiums with these companies and several others. They prefer to connect directly to your bank account and suck the cash right out of it.

What Can We Do?

Although it may not get the results you would favor, I still recommend writing to the president of the company and to your U.S. Congress representative. The more people that write, the more our voices can be heard and perhaps some of those greedy companies just might listen – if they are pushed. It’s the little things that can make a big difference.